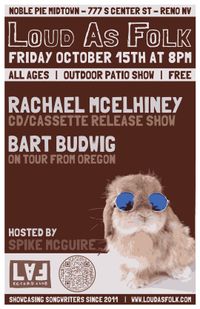 Loud As Folk Record Club's next made to order release is Rachael McElhiney. Join us October 15th at Noble Pie Midtown to get a tape or CD hot off the presses. You can also pre-order copies on vinyl starting the same day!

Rachael will be performing an intimate set of mesmerizing melodies, bewitched beats, and uncanney ukulele. Touring troubadour Bart Budwig balances the bill with a danceable duo as he makes his way down the road from Enterprise, OR.

This patio pizza party is ALL AGES and FREE AS FOLK!